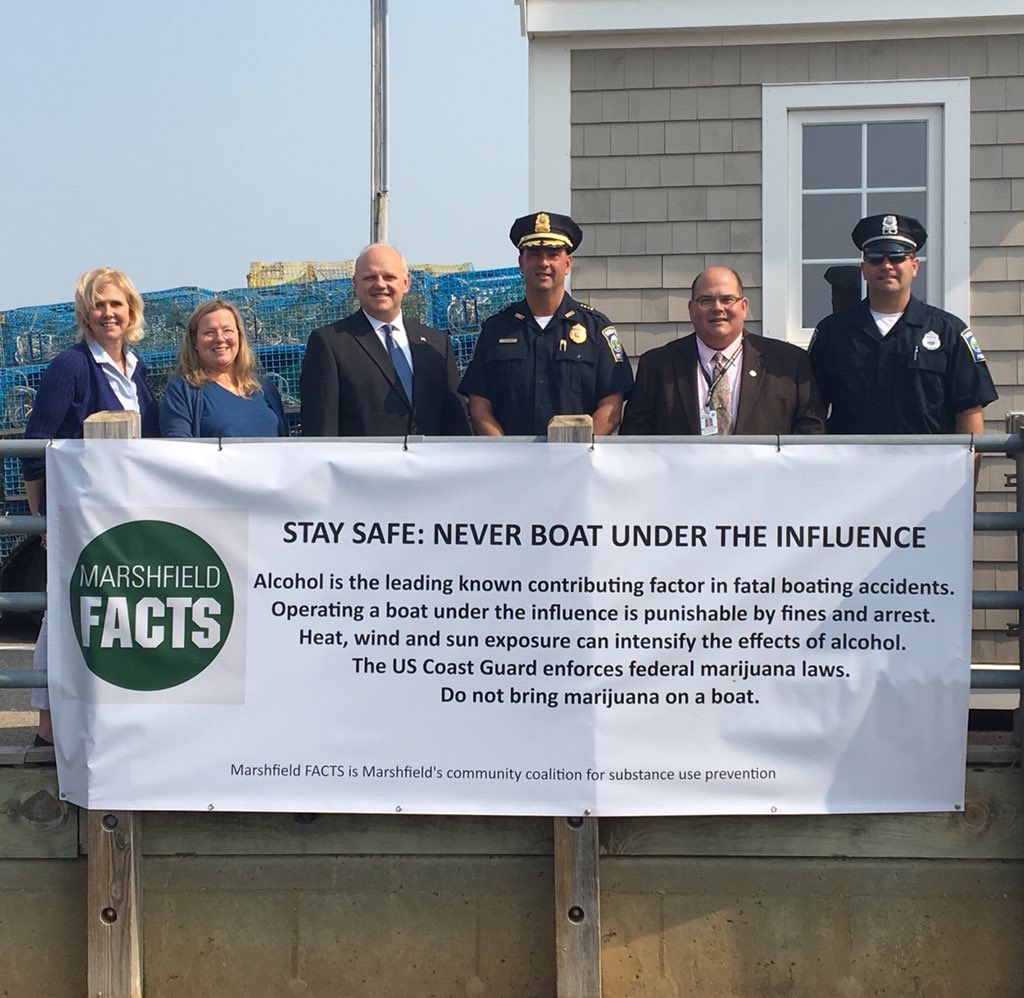 Memorial Day marks the unofficial start of summer; in Marshfield, as boats begin to hit the water to have fun in the sun, town officials are encouraging safety and responsible operation of watercrafts.

On Friday, May 25, Marshfield F.A.C.T.S. unveiled a new banner the organization donated to the harbormaster’s office now on display at the town pier, urging boaters not to operate under the influence of alcohol and drugs.

“We have different issues in the summer than we do the rest of the year,” said F.A.C.T.S. co-chair Jen Cantwell. “We felt like impaired boating is not an issue that people are familiar with.”

Alcohol and drugs are involved in almost 50 percent of accidents on the water, and over 75 percent of vessel accidents have a human factor contributing to the cause. Given these statistics, Marshfield Harbormaster Mike Dimeo said it’s crucial that boaters operate responsibly.

“I think they’re out on the water and they forget about everything,” said Town Administrator Mike Maresco. “There’s a lot of focus now on drinking and driving but I don’t think that extends to drinking and boating.”

Cantwell said stressors while boating, like wind, sun and vibration can intensify the effects of alcohol, making the situation even more dangerous.

“It’s a beautiful place down here,” said Plymouth County District Attorney Tim Cruz. “We’ve got great weather and we’re only just starting the summer, so this reminds everybody that there are still rules and regulations that we need to keep people safe. Alcohol and drugs should not be on the waterway. Everybody kind of thinks sometimes that there are no rules, that you can go out and do what you want, but there are and we need to keep people safe.”

Marshfield has a strict “No Wake” policy, meaning that boats should not be travelling greater than 6 miles per hour while in the North and South rivers. The first offense for breaking the “No Wake” policy is a $150 fine, with $250 for the second and $300 for the third.

“People need to also remember that excessive speed and wake is arrestable,” said Marshfield Police Chief Phil Tavares. “Everything on the ocean is arrestable under Chapter 90B, so in an extreme case, not only would they potentially get a fine but they can also get arrested.”

“You’re always responsible for your wake,” Dimeo said. “If you’re in the North or South river going fast, and there’s a person on a floater or a child on a small craft and your wake knocks them over, they fall in the water hit their head, you can be held liable for that. That’s going to be turned into a criminal offense.”

Dimeo said the main method of enforcement is through education.

“We don’t issue a lot of tickets,” he said. “We try to educate people first, rather than hit them in their wallet, no different than a cruiser on the side of the road slowing people down. They’re out there to have fun. If you give somebody a $150, $300 ticket, it puts a bad taste in their mouth. Boating in New England is seasonal to begin with, so if you’re able to just educate them, those are the things that keep people alive.”

The new F.A.C.T.S. banner also reminds boaters that while recreational marijuana is legal in Massachusetts, it becomes illegal the moment it is taken on a boat, because the waters are monitored by the Coast Guard, a federal agency, and the drug remains illegal at that level.

Dimeo said he wants residents to enjoy the waterways and the season, and that he and his crews are there with a specific purpose.

“We’re mainly out there for safety reasons,” he said. “We’re making sure people aren’t bow riding, making sure people have enough life jackets on board and are operating properly, that they’re not zigzagging wakes or jumping wakes, putting people at risk.”

“We hope that the banner will be a good reminder for the individuals before they put their boats in to head out and have some fun,” Cruz said.