BROCKTON — More than a hundred Brockton residents took to the streets to walk in peace against gun violence for the third annual Father's Day Peace Walk on Sunday morning.

In a City Hall office in 2019, where walk organizer Sharon Baker worked, she spoke to one of her colleagues about what she could do about the anger and hurt growing inside.

"I started the walk because I was angry, and there was a lot of anger building up inside of me towards my son being murdered," said Baker, whose son, Tyrelle Baker, was fatally shot in Brockton in 2012.

"I told my coworker I have to do something. I have to get rid of this anger," Baker said. "Grief comes in many stages, some people say it's five, some say it's 12, but there's no number on it. Some days I'm OK, and other days I'm crying because I miss my boy."

Baker said she didn't want to live her life filled with angst. She needed a plan. Baker prayed about it and she said God gave her an idea — a peaceful walk. 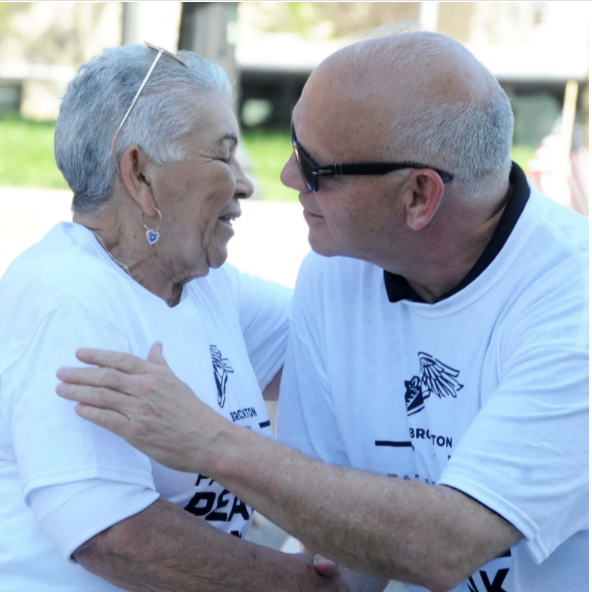 Baker has dedicated over six years of her life to educating the community about gun violence prevention and healing since the murder of her 23-year-old son.

In 2015, Baker founded Life After Death, a Brockton support group for people who has lost a loved one, but is open to anyone.

LaDawn Baker, the founder of A Call to Survivors Inc., a nonprofit for victims and survivors of domestic violence and sexual assault, attended the walk to support her cousin Baker.

"I am a survivor," LaDawn said. "I speak and share my story and I encourage others to speak up even if they've never experienced domestic violence or sexual assault directly but to speak up and advocate for others."

LaDawn has lost two family members to gun violence and said she appreciates events like the Father's Day Peace Walk because it gives her hope for a brighter future.

"Events like these are always helpful. They're needed. It's a necessity and we hope each year more and more people participate," she said. "The more the community sees residents, friends, neighbors, elected officials, business owners that are out here involved, it makes an impact."

"It sends a message to people out here committing these crimes that we don't want it anymore," LaDawn said. "Enough is enough. Being able to show solidarity and helping family members living in hell for the rest of their lives because they lost their loved ones to gun violence."

Councilor-at-large Tina Cardoso spoke to the crowd about the efforts Brockton is taking toward creating a safer environment for everyone. Cardoso said she is aware that programs and resources are needed to better assist the people of Brockton and is working to make them readily available.

"We heard from the attorney general's office that the gun violence in Brockton had gone down, but there's still a lot of work to be done," Cardoso said. "We just got out of a pandemic, so we don't know the impact of the pandemic just yet."

"We have to stay ahead of it and putting resources and programs to help the community, so we're prepared when we have a full analysis of what the pandemic has done to folks," she said. "A lot of folks have been locked up for so long we don't know how their mental health is. We have a lot of work to do."

Jamal Gooding, the manager of a Brockton group called P.A.C.C., which stands for People Affecting Community Change, wrapped up the event by giving the crowd some words of inspiration and introducing a Brockton success story — Makai Gilbert, a young man who just graduated from college and returned to his hometown of Brockton to help with community outreach and give back.

"It's refreshing to see," Claudia Goncalves, a Brockton resident and a survivor of gun violence, said about Gilbert's success.

Once the event came to a close, Baker directed everyone to the afterparty at 15 Nilsson St., where New Life Temple of Holiness church hosted a cookout with hotdogs, cheeseburgers, chips, drinks and other light refreshments.

Every year the event will get bigger and bigger, and more people from the community will participate and help end gun violence for good, Baker said.